Ange E. Curcio was born in 1971 in Calabria, Italy and raised in Torino. His first introduction to percussion was banging on pots and pans in the family kitchen at the age of five. A year later Ange and his family left Italy and moved to Montreal, Quebec, a city that is as vibrant as the music inside of him. Ange worked hard, practiced daily and at the age of 15, played his first professional gig. While creating his trademark sound and groove, Ange has developed a diverse style as a drummer that has brought him numerous accolades from peers and fellow artists. Ange has toured extensively throughout Canada, the United States, Japan and Europe. He has backed international recording artists Saints and Sinners, Corey Hart, Jonas, as well as Québec’s international platinum recording stars Michel Pagliaro and Éric Lapointe, with whom he received several Felix Awards, including the award for Best Show in 2000. 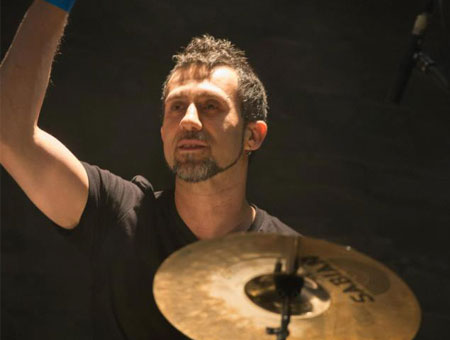