Born and raised in Florida, Billy Thomas first began playing drums at the age of 11, when he discovered his brother’s drumkit in the attic of their home. When his brother quit playing the drums and went on to become the athlete of the family, Billy took over the kit. Playing in his first band by 13, Billy played drums in a number of bands in the Florida area before making the move to LA.

Once in LA, Thomas got a job as a delivery truck driver, which he quickly tired of. He successfully auditioned for a spot with the Hudson Brothers, and was instructed by the band to get a passport because he would be flying to his first performance. It was Billy’s first time in an airplane, and it was then and there he decided playing drums was going to become his career.

In LA, Thomas also played with Ricky Nelson and Mac Davis, among others. He was a member of the band Combo Nation – their album was produced by famed producer Ted Tempelman. Although he was performing steadily in LA, Thomas found himself playing too many “B” gigs, too few “A” gigs. So after 14 years in LA, Thomas and his wife decided to move their young family to Nashville.

It turned out to be a great move. In his first week there, Thomas got a gig singing backing vocals on a record and found himself singing next to Vince Gill, who was singing at that same session. The two hit it off, and Gill asked Thomas to play drums in his new band. Other than a brief hiatus – Thomas played with Emmylou Harris, McBride and the Ride and others – Billy Thomas has played drums and sang with Vince Gill ever since. 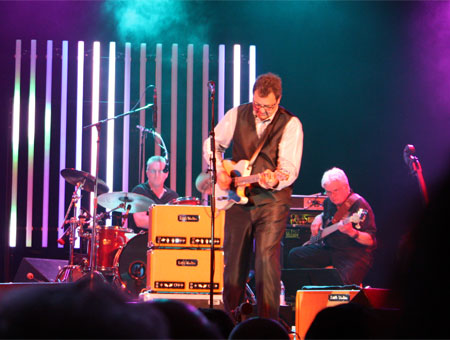