He is a graduate of the prestigious Berklee College of Music, being the first Puerto Rican student there obtaining a Bachelor of Music in 1979 receiving their prestigious Faculty Association Award. Bobby has become a leader in the Latin jazz and jazz fields as both a drummer and percussionist and is recognized as one of the most articulate musician-scholars of la tradición living today. He has been featured on numerous Grammy-nominated albums, including The Mambo Kings and other movie soundtracks. Mr. Sanabria was the drummer with the legendary “Father of the Latin jazz movement,” Mario Bauzá’s Afro-Cuban Jazz Orchestra recording three Grammy nominated CD’s which are considered to be definitive works of the Latin jazz big-band tradition. In 1993 Bobby and his nonet Ascensión released ¡NYC Aché!, on the Flying Fish label. It received worldwide acclaim and garnered four and half stars in Down Beat magazine, as well as receiving a nomination for Best Record of the Year by the National Association of Independent Record Distributors (NAIRD). In June 2000 Bobby released Live & In Clave!!! recorded live at Birdland in New York City, it features Bobby powering a big band. Critically acclaimed worldwide, it has been hailed by both the jazz and Latin music cognoscenti as a masterpiece, and was nominated for a mainstream Grammy as the Best Latin Jazz Album of 2001. Afro-Cuban Dream…Live & In Clave!!! was also nominated for the Jazz Journalists Association 2001 Award for the Best Afro-Cuban Jazz Album of the Year. ¡Quarteto Aché!, (2002) documented Bobby’s virtuosity in a small group setting and was hailed a “classic” by Modern Drummer and acclaimed by the New York Times. It was nominated for Best Latin Jazz recording of 2003 by the Jazz Journalists Association. He received a second Grammy nomination in 2003 for, 50 Years of Mambo – A Tribute to Damaso Perez Prado. Bobby’s next CD, Big Band Urban Folktales, was nominated for a mainstream Grammy in 2008 for Best Latin Jazz recording, his third nomination. It garnered critical acclaim for its futuristic approach to the Latin jazz big band canon. Big Band Urban Folktales won the 2008 Jazz Journalists Award for Best Latin Jazz Recording of 2008.

Maestro Sanabria was an assistant producer, on air personality in “FROM MAMBO TO HIP HOP” – A SOUTH BRONX TALE winning the 2007 ALMA Award for Best Television Documentary. He co-produced and was in the nationally broadcast documentary, THE PALLADIUM – Where Mambo Was King,” for the BRAVO network which received the award for Best Documentary for a Cable TV in 2003. Mr. Sanabria was a consultant in the Smithsonian’s historic four year traveling exhibit, Latin Jazz: La Combinación Perfecta and also featured in two of the exhibits short films. He appears in the groundbreaking 4 hour documentary on Latin music aired nationally on PBS in the U.S.A. entitled, LATIN MUSIC U.S.A. in October, 2009 which is available on DVD and is featured in the interactive website. Mr. Sanabria was a presenter at the prestigious 2009 Aspen Ideas Festival speaking about this ground breaking series.

His recording, KENYA REVISITED LIVE!!!, a masterful tribute and re-working of the Machito Afro-Cubans legendary KENYA album features him conducting the Manhattan School of Music Afro-Cuban Jazz Orchestra. Nominated for a Latin Grammy for Best Latin Jazz recording of 2009, it gave him his fourth nomination. In 2011 his big band headlined at Harlem’s legendary Apollo Theater in a concert produced by Bobby celebrating the 100th birthday of his mentor Mario Bauzá, the founding Father of the Afro-Cuban Jazz tradition. His 2011 CD, TITO PUENTE: MASTERWORKS LIVE!!! Bobby conducting the Manhattan School of Music Afro-Cuban Jazz Orchestra, was nominated for a Latin Grammy establishing this student ensemble as a shining example of the heights that can be achieved through jazz education giving him his fifth nomination. As with KENYA REVISITED LIVE!!!, partial proceeds of the sale of each CD go to the scholarship fund of the Manhattan School of Music.

In 2006 Mr. Sanabria was inducted into the BRONX WALK OF FAME having a permanent street sign named after him on the borough’s famed Grand Concourse. He has been presented the 2008 Lifetime Achievement Award by KOSA for his outstanding accomplishments in jazz and Latin music both as a performer and educator and the 2008 Martin Luther King Jr. Mentor Award was presented to him by the Manhattan Country School for his work in the world of jazz. The Jazz Journalist Association named him Percussionist of the Year in 2011 and 2013. Maestro Sanabria’s own multi-Grammy nominated Multiverse Big Band has appeared at numerous high profile jazz festivals across the country and in Europe. In 2011 they shattered the attendance record at N.Y.C.s Lincoln Center Out of Doors performing for a crowd of 18,000 attendees. His orchestra has also appeared at the Verona Jazz Festival in Italy and recently in 2013 at Central Park’s Great Hill performing for a crowd of 4,000 fans.

As an activist he has long been a champion for the recognition of Latin jazz as a legitimate art form and its proper place in the history of the jazz continuum. In 2006 he spearheaded a successful campaign to restore the Latin Jazz Cruise on Jazz 88 WBGO FM after it was suddenly taken off the air without an explanation. In April, 2011 when NARAS, the governing body of the Grammys summarily cut 31 categories, including Latin jazz, from the awards process with no rhyme of reason, Mr. Sanabria spearheaded a campaign uniting well known musicians from both the west and east coasts. A law suit filed by Mr. Sanabria and fellow plaintiffs Eugene Marlow, Ben Lapidus and Mark Levine in New York State Supreme Court finally pressured NARAS into reinstating the category in 2013. For his role as an activist and his efforts in restoring the category to the Grammys Bobby has received the BORIMIX Award from the Society of the Educational Arts and the prestigious Puerto Rican Heritage Award from Comite Noviembre, the leading Puerto Rican organization in the country.

In 2012 Maestro Sanabria was selected by the legendary jazz pianist Herbie Hancock to represent Latin jazz with his Quarteto Ache’ as part of the first Annual UNESCO International Day of Jazz at the United Nations. His current big band CD released in August of 2012 is entitled MULTIVERSE. Inspired by the writings of Mexican author Octavio Paz and the current scientific theories of multiple universes, it blurs the boundaries between jazz, Latin, funk, rock, r & b, gospel, the avant garde and even rap. MULTIVERSE has been praised by critics for its incredible multi-dimensional vision bringing the big band tradition into and beyond the 21st century. It was rnominated in 2013 in two categories for the mainstream Grammys: Best Latin Jazz Recording and Best Instrumental Arrangement, giving Bobby a total of seven nominations for the coveted award. Upcoming events for his orchestra include a concert honoring “Composers of the Americas” at the America’s Society in NYC (October 15); a mega concert in honor of Puerto Rico’s greatest composer, Rafael Hernandez, which will feature his Multiverse Big Band with strings, and headlining for the first time at Dizzy’s Club Coca-Cola in NYC, November 21st through the 24th. If this weren’t enough, Maestro Sanabria celebrates this year his 23rd anniversary as Associate Professor at the New School and his 18th as Professor at the Mighty Manhattan School of Music.

His new 2014 big band release, İQUE VIVA HARLEMỊ, a masterful tribute to the birthplace of Afro-Cuban Jazz, has him conducting and performing with his students in the Manhattan School of Music Afro-Cuban Jazz Orchestra. It has made the top 25 list of most important jazz releases of 2014 in Downbeat magazine as well as receiving a ****1/2 star review from the magazine and the top 10 releases list for 2014 of Descarga.com “… under the direction of the mighty percussionist Bobby Sanabria – a monumental record.” – Raul De Gama, Latin Jazz Network. Mr. Sanabria along with folklorist Elena Martinez have been recently named co-curators and artistic directors of the Bronx Music Heritage Center. 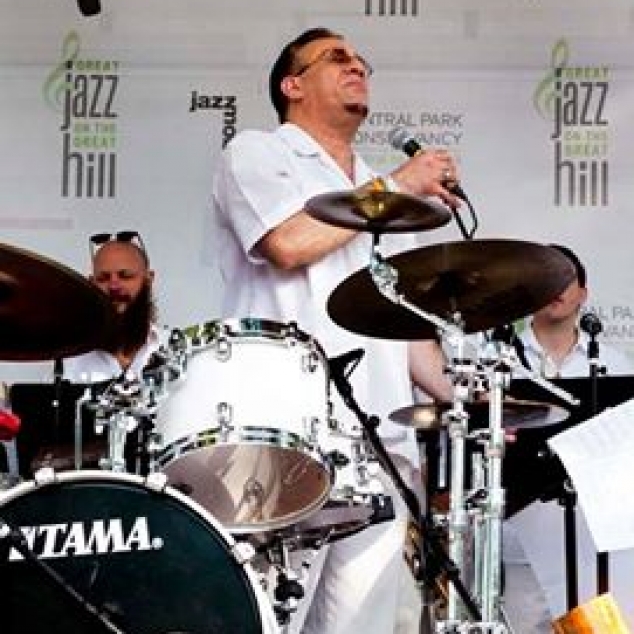 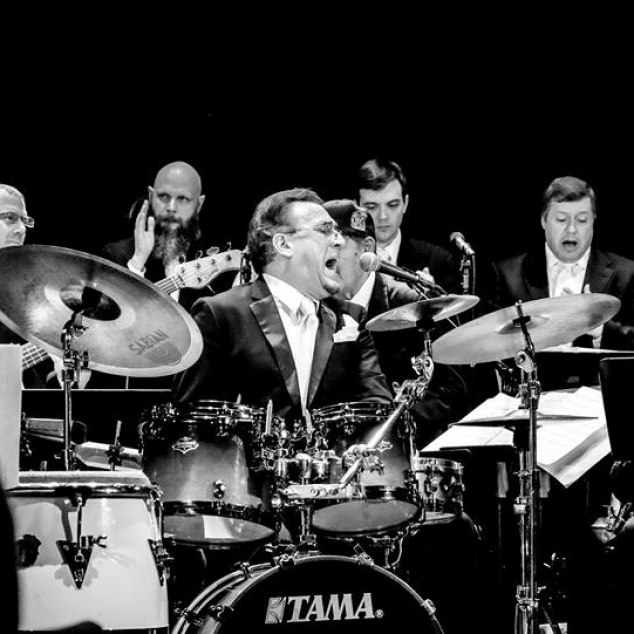 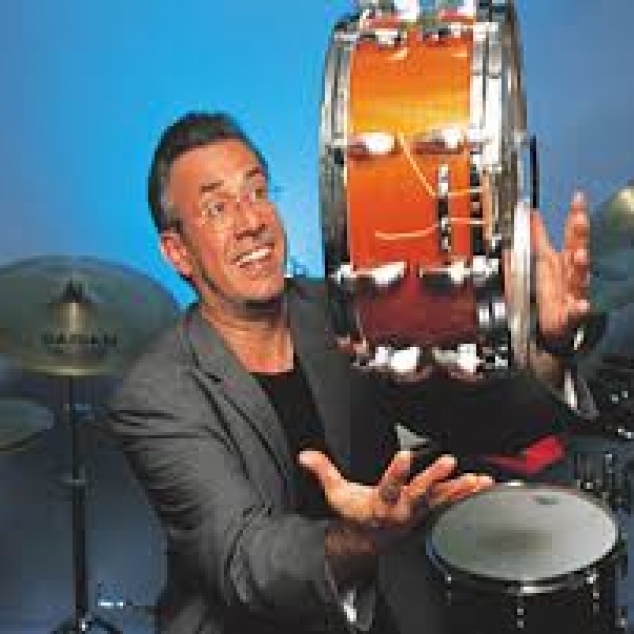