Brian Stevens is in his twelfth year with the band program at Stephen F. Austin High School. Mr. Stevens completed his degree in Music Performance at the University of Southern Mississippi in Hattiesburg, Mississippi. While attending the University of Southern Mississippi, he studied percussion with Dr. John Wooton and Dr. Sherman Hong, and performed with the Wind Ensemble, Symphony Orchestra, Percussion Ensemble, Steel Band and The Pride of Mississippi Marching Band.

Brian is a native of Tupelo, Mississippi. His father, Floyd, is a retired band director and his mother, Linda, is a retired choral director that also assisted with the band program. Currently, Mr. Stevens resides in Meadows Place, Texas with his wife, CJ, and their kids, George, Hannah and Ella. 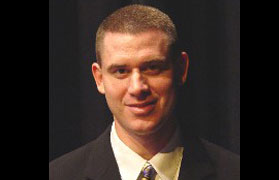