Chad LaRoy began his musical career over 15 years ago, as a self-taught, mid-western boy laying down the beat with a string of various cover bands in the St. Louis, Missouri area. In 1999, fate took a bright turn, LaRoy agreed to collaborate with a guitar player who had taken out an ad in the local paper for a drummer. If recent success is any indicator: this partnership was to be the beginning of rock-and-roll dreams come true and of a long, storied career. The two went on to form the post-grunge/hard rock band, “Cavo,” which continually and steadily gained a large local and loyal following; catching the attention of some major music labels.

Only one year after its formation, Cavo recorded its first EP in 2000, titled “Space To Fill.” Continued success led them to record “Painful Art of Letting Go” over 2004 and 2005. Having proved their musical and song writing abilities as a rock band, Cavo was signed by major record label, Warner/Reprise in October 2008. Ironically, LaRoy learned his self-taught skills by listening to musicians such as Dave Grohl, Matt Sorum, John Bohnam and Daniel Adair: would soon find himself pounding the skins in high-profile gigs that would revival those of his mentors.

Leaving the Mid-West behind, the band made the move to New York where it recorded their first major record, “Bright Nights, Dark Days,” from September 2008 to February 2009. Since the album’s release on August 11, 2009, Cavo has been burning up the rock charts. The first single, “Champagne,” went #1 for three weeks, and it is currently still riding the top twenty. The second single off the album, “Crash” was released at the end of September and is sitting in the top ten. “Let It Go” from the album is featured on the movie soundtrack, “Transformers: Revenge of the Fallen,” which was released on June 23rd. It has currently been released to Top 40 radio and has already climbed into the top 50.

Slipping easily into the “rock-and-roll lifestyle,” from his drum throne with Cavo; LaRoy has garnered notoriety and attention with his hard-hitting style, striking good looks and female crowd-pleasing shirt-less uniform, helping him having swiftly gain the admiration of many adorning fans. Undoubtedly, LaRoy and Cavo are carving themselves a shining path in the music industry.

Cavo is currently getting ready to kick off a second leg of a US tour with one of the biggest headliners of the year with “Daughtry” and “Lifehouse” through mid summer of 2010. They have been touring since May of 2009, with some heavy hitting company, which includes bands such as: “Motley Crue”, “Godsmack,” “Shinedown”, “Puddle of Mudd”, “Sick Puppies,” and “Theory of a Deadman.” 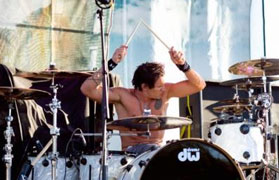