Chris Prescott is a San Diego-based multi-instrumentalist with a diverse background of interests and accomplishments. Beginning his recording and touring career at barely 18 years old, Chris’s musical path had an auspicious start. One month after completing high school Chris signed a record deal with Cargo/Headhunter records, which was the first album to what numbers now at over 50. Various bands that Chris has recorded and toured with include Pinback, Jimmy Eat World, Rocket from the Crypt, No Knife, Tanner, Montalban Quintet, The Jade Shader, Fishwife and others. Concert tours over the past 25 years has taken him to perform in over 160 cities in far away places including Russia, Brazil, Czech Republic, Japan, Australia, Canada, Europe, United Kingdom, Mexico and all across the United States.

Chris has kept a full teaching roster of students between tours, as well as filling in on studio recording sessions with various bands from the local San Diego music scene. In addition to Chris’s accomplishment in the indie rock world, he frequently performs in jazz groups and other musical settings. Recently Chris has formed the experimental jazz group Montalban Quintet, which has received rave reviews and promises to be a group to watch in the coming years.

In the constant pursuit of musical education, Chris has completed his formal studies at UCSD with a degree in Percussion/Jazz Studies, graduating Summa Cum Laude. This was a fertile environment to explore the worlds of “New Music”, Minimalism, Avant Garde and the rich history of Jazz. Here he had the privilege to study with world-renowned percussionist Steven Schick. Recently Chris has published a revolutionary book on musical interpretation entitled Creative Construction. The book focuses on the practice of writing drum patterns that complement musical counterparts. After the editors at Modern Drummer caught wind of Chris’s book, he was then commissioned to adapt its content for a series of articles in their 2011 issues. The sixth installment was published in March 2018 and was accompanied by instructional drumming videos on the Modern Drummer website. 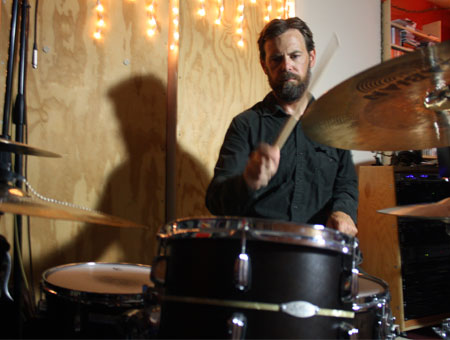