Cliff Sarcona is a drummer & percussionist from the New York area. His style is often described as being heavily influenced by Keith Moon, Jon Bonham and early Billy Cobham. He is currently the drummer for the NY Band ‘As Tall As Lions’, for which he has spent the last 7 years touring heavily throughout the US, Canada and several locations throughout the world including Australia and the United Kingdom.

Drumming since age 10, Cliff has professionally recorded and released over 50 songs with his current band. On stage is where Cliff tends to thrive: As Tall As Lions have toured with bands such as Silverchair, Mutemath, and Dredg among several others, for 800+ shows in the span of his career. During that time Cliff has also performed on TV shows such as Jimmy Kimmel Live and Fuel TV. Cliff enjoys playing many different styles of music, and also excels at performing free improv, performing strict improv shows where and when his schedule allows.

Cliff looks forward to a busy and eventful 2010, where he will continue supporting his band’s 2009 release with a full US headlining tour, as well as performing at the high profile Coachella Music Festival for the first time. 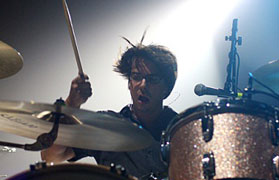