Mr. Hetrick holds a Bachelor of Music degree from the University of Delaware, where his major teacher were Christopher Williams (Principal Percussionist, Baltimore Symphony Orchestra) and Harvey Price, and a Master of Music degree from Indiana University, where he studied with George Gaber and Gerald Carlyss. While at I.U., he was awarded a Performer’s Certificate, and was selected to perform the solo work Set Up Music, by Maurice Wright, at Carnegie Hall. His other teachers include William Schinstine, Jim Chapin, and Alan Abel.

As a performer on drum set, Mr. Hetrick plays with the ISO on Pops concerts, and with the jazz group Equinox, most recently seen at the International Formula One race at the Indianapolis Motor Speedway. He has toured extensively in the United States with Perry Como, Johnny Mathis, Jimmy Dorsey, and Al Cobine. Hetrick also performed with Dominic Spera’s jazz ensemble at I.U., and while in high school, with the American Youth Jazz Band, which included a European tour.

Besides recordings with the Indianapolis Symphony, Mr. Hetrick can be heard with other Indiana University faculty on David Baker’s chamber work, “Homage a L’Histoire, from Bay Chamber Concerts on Cala records. Other recordings include a two- disc set with Randy Carmichael, son of famous composer, Hoagie Carmichael, entitled Carmichael Sings Carmichael.

As a composer, his composition Tip of the Andes, (published by Southern Music), has been performed by percussion ensembles throughout the United States and Europe. This includes a performance in Washington, D.C. by the “President’s Own” Marine Band, under the direction of John J. Tafoya. Tip of the Andes won first place in the Delaware State Music Teachers Association Composition Competition, and has been reviewed in Percussive Notes magazine.

A well-respected educator, Mr. Hetrick teaches at Butler University, and as a Visiting Professor of Percussion at Indiana University’s Jacobs School of Music.
Mr. Hetrick has presented clinics on orchestral percussion for the Indiana Percussive Arts Society, Bands of America, and PASIC 2004 in Nashville, TN. 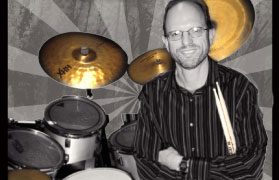