Curly Smith started playing guitar, drums and singing by the age of 12 years old and picked up the harmonica at 14. He honed his skills playing in a variety of bands in Arkansas, Texas and Louisiana before joining Jo Jo Gunne in California. Jo Jo Gunne had a top 40 hit (Run Run Run) and toured extensively in the USA and Europe.

After Jo Jo Gunne, Curly worked with a variety of artists in Los Angeles, London and Miami, including Jeff Beck, Rod Stewart, Stevie Ray Vaughn, Branford Marsalis, The Monkees, Joe Walsh, Warren Zevon, Brian Auger, Sam Kineson, Billy Idol, Willie Nelson, Ron Wood, Dickie Betts, Bonnie Raitt, Jackson Browne, Ian Hunter, and many, many more. Smith is one of the few drummer who has the distinction of having played side by side with Keith Moon.
Smith has played on numerous #1 hits including the hit single “Missing You” with John Waite, “Heaven is a Place on Earth”, “I Get Weak” and “Circle in the Sand” with Belinda Carlisle and “Heartbeat” with Don Johnson.

During the 90’s, Tom Scholz of Boston invited Smith to join the band. Curly became a member of Boston, and toured and recorded with the band from 1994 to 2001. He recently rejoined the band and sang lead vocals at the Brad Delp Come Together Tribute. Curly performed on the BOSTON’s Greatest Hits CD and performed and co-wrote with Tom Sholtz on the “Corporate America” CD. Curly is currently reuniting with the band Boston for the band’s 2012/2013 touring dates.

BORN IN:
This Century 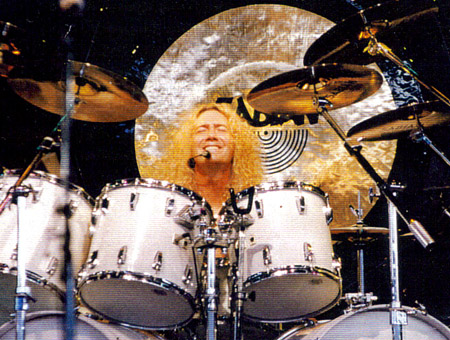