Dave Hassell has been working as a professional musician for over 40 years, playing in a diverse range of musical settings. For over 20 years he was very active as a session musician, however the last 15 years have been devoted to live performance and education. Dave has worked with many of Britain’s leading jazz musicians as well as many of the visiting American players, such as: Charles McPherson, Barney Kessell, Tal Farlow, Al Grey, Clarke Terry, Joe Newman, Art Farmer, Mundel Lowe, Ron Jackson, E T Mensa and Dr John to name a few. He is also one of the UK’s foremost authorities on Latin American music and leads his own band, Apitos.

In addition, he has been on the faculty of many Summer schools, including South Wales Jazz Course, Wavendon, and is currently teaching and performing on the new Trinity Jazz Course. He also presents workshops and master classes throughout the UK, Europe, North and South American, and is currently an endorsee for SABIAN Cymbals and PJ Percussion. Dave is also the author of four successful drum tutor books.

In March 2002, Dave was appointed an Honorary Associate of the Royal Academy of Music.

In 2007 he was awarded the position of Visiting Fellow at Salford University. 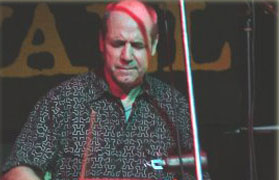