Dave Potter is quickly becoming known as a formidable musician. He has performed with many well-known jazz artists and recorded 2 albums with Jason Marsalis, as well as the soundtrack to a short film with bassist Delbert Felix.

Born in Danville, VA, Potter did not grow up into a musical family. “I got my first drumset when I was 15 years old and remained primarily self-taught until college,” comments Potter. It was at Florida State University that he met pianist Marcus Roberts, who would become one of his primary musical mentors. In 2005, he was chosen from a national pool of applicants to be a member of the Louis Armstrong Quintet at the University of New Orleans. “I moved there to study with Herlin Riley. My goal was to learn as much about the jazz tradition as possible.”

Unfortunately, Mother Nature had different plans, and his apartment, along with most of the city, was ravaged by the tragedy of Hurricane Katrina. After a brief stint teaching jazz and percussion at his high school Alma matter, Potter returned to Florida State to study and perform with Marcus Roberts. After graduating in 2008, he moved to Atlanta where he maintains a busy performance schedule.

Throughout his career he has played in a variety of musical situations. “In high school I started playing in funk, hip-hop, and rock bands and ended up getting really into 70’s fusion.” It was also in high school that Dave began to play in musical theatre productions, concert bands, marching percussion ensembles, and jazz ensembles under the direction of Dr. Andrew Sioberg. Once at FSU, he began to study Afro-Caribbean percussion with acclaimed Puerto Rican pianist Jose “Papo” Carrasco, as well as focusing more on classical snare drum and Jazz with Leon Anderson.”

This broad range of study has allowed him to become one of the most in-demand young drummers in the scene today.

FAVORITE ALBUM YOU PLAYED ON: Jason Marsalis, “In a World of Mallets”

CAREER HIGHLIGHT: Performing with the Marcus Roberts Trio at the Gainesville Jazz Fetsival 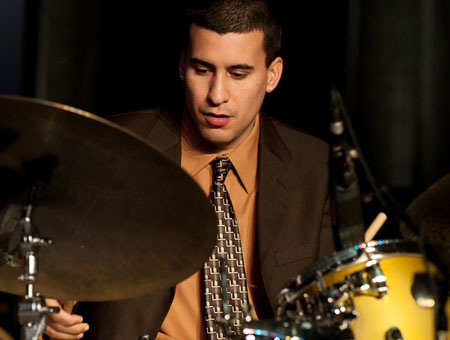