Diana E. Valdés Santos, former professor at Interamerican University of Puerto Rico and new professor at “Escuela Libre de Música of San Juan” (her alma máter) since 1996 until present , earned a Masters Degree in Percussion Performance from the prestigious Indiana University in Bloomington.
Holds a Bachelor degree from the Conservatory of Music of Puerto Rico, being the first female graduated from the Percussion Department, Magna Cum Laude, where she also won the percussion medal and the Robert I. Ferdman award, granted to the highest average. Ms Valdés has studied with: Roberto Valdés, José Alicea- Espada, William Roberts, David Baker and Samuel Lifschitz.
She has performed at La Bastille Opera House in France with the Philharmonic Orchestra of Indiana, the Puerto Rico Symphony Orchestra, David Baker’s Jazz ensemble, Dominic’s Spera Jazz ensemble, State Band of Puerto Rico and many well known puertorrican artists in the popular scene as Dr. Raymond-Torres-Santos. As drummer, performed for 7 years with a well requested group called “Conjunto Fiesta”.
From 1990 thru 1996, worked as part of the faculty of the Interamerican University, San Germán campus, where she was recognized as outstanding teacher of the year in 1995.
Ms. Valdés is an advocate of the percussion ensemble group, which has allowed her to lead the following ensembles:

Many pieces have been premiered in Puerto Rico under her direction, pieces from : Jaime Vivanco’s, William Robert’s, Nathan Daughtery among others. Past May (2016), the ensemble from the Preparatory School of the Conservatory, celebrated their 10th anniversary with a commemorative concert.
Respected Clinitician, has given clinics at: Indiana University, San Germán Interamerican University (I.U.S.G.), Conservatory of Music, where she has been invited several times being this edition 2016, the recent one.
Professor Valdés, is endorsed by : Grover Pro Percussion 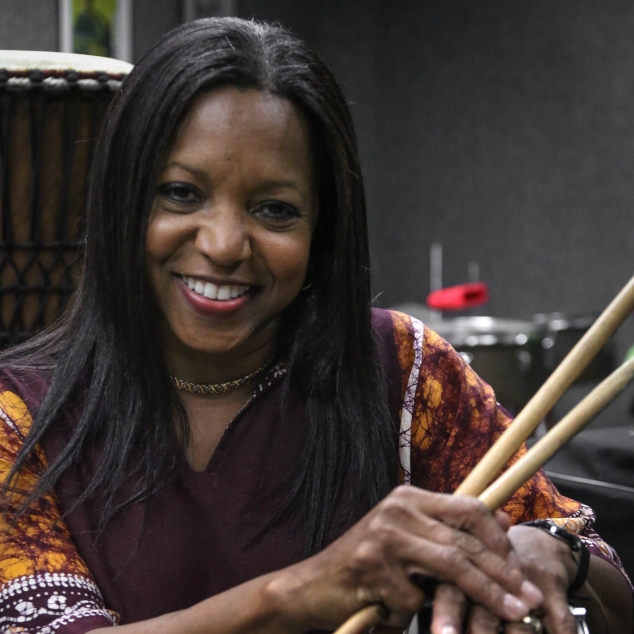