Los Fabulosos Cadillacs with SABIAN artist Fernando Ricciardi on drums have been widely acclaimed as one of the world’s most important rock bands of the past two decades. Recognized for their groundbreaking fusion of ska, rock, tropical, punk, reggae and Latin rhythms, the Cadillacs have sold millions of records worldwide. They became stars in their native Argentina throughout the late 80s before propelling the Latin Rock genre into the international spotlight in the 90s.

Songs like “Matador” and “Mal Bicho” were anthems for a generation and inspired thousands of youth and musicians across the globe. Los Fabulosos Cadillacs’ reputation led to recording collaborations with a variety of stars including Mick Jones (of The Clash), Celia Cruz, Ruben Blades, Deborah Harry (Blondie), Chris Frantz and Tina Weymouth (of the Talking Heads) and Fishbone.

Global hit “Matador” was called “one of the greatest rock songs, in any language” by New York Magazine, and was considered to be the first Latin Rock smash hit in the U.S. It permeated clubs, stereos and radio stations across the country. The song gained such notoriety that it won MTV Latino’s “Video of The Year” award and the “Billboard Award for Best Latin Video”. It also caught the ear of actor John Cusack who would handpick the track for the Platinum-selling soundtrack to the film, “Grosse Point Blank”.

When the Grammy for Best Latin Rock/Alternative Album was first presented, it seemed appropriate that the award would be given to the Cadillacs’ genre-bending masterpiece Fabulosos Calavera. The Los Angeles Times described the album at the time as “The Sgt. Pepper of the Rock en Espa 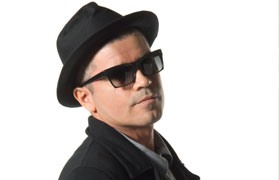