Frank began drumming at the age of 10 after recieving his first kit as a Christmas present. After 6 months of formal lessons he decided to teach himself by playing along to his favorite albums. The ususal string of local bands striving for fame and fortune followed until in 1996 Frank got a break in the form of Stuck Mojo.

He began touring with the band supporting their debut album for Century Media Records entitled “Snapping Necks”. Frank remained a member of the band until 2000 recording the albums “Violated” (European E.P.), “Pigwalk”, “Rising”, “HVY 1”, and “Declaration of a Headhunter”. Stuck Mojo toured constantly during this period completing several tours of the U.S. and Europe as headliners and also opening for the likes of Pantera, Type O Negative, Testament, Machine Head, Sevendust, Clutch and Biohazard. Highlights of this period included playing the main stage twice (’96 and ’98) at the Prestigious “Dynamo Open Air” festival in Holland and being voted “Best Live Band” by MTV Europe in 1996.

In 2000 Stuck Mojo went on hiatus leaving Frank and Stuck Mojo guitarist Rich Ward an opportunity to form Fozzy with then WCW and current WWE world champion Chris Jericho. Fozzy released it’s self-titled debut album on Megaforce records in 2000. The album was released in conjunction with a half-hour long “mockumentary” entitled “Unleashed, Uncensored, Unknown” which, in Spinal Tap-like fashion, laid out the bands fictional back-story explaining how they had been trapped in Japan for the last 20 years writing songs that were subsequently stolen by top acts such as Judas Priest and Iron Maiden. Fozzy wore wigs and outlandish 80’s style clothes but neverthelesss won praise for it’s musical abilities. A second album followed in 2002 called “Happenstance” which, though somewhat continuing the “lost in the 80’s” gimmick , featured still more original material from the band.

In 2004, Fozzy released it’s first album of all original material called “All That Remains”. The wigs, costumes, and back-story of the previous incarntions of the band were dropped and Fozzy was for the first time standing on it’s own merits. The album featured guest appearances by Zakk Wilde, Marty Friedman, Mark Tremonti and Bonecrusher and the single “Enemy” received strong radio airplay. Highlights of the tour included a spot on England’s “Download” festival and tours of Europe and Australia. 2006 saw Frank looking to spread out and play with some other people. He joined Atlanta band Soundevice with former Stereomud vocalist Erik Rogers who toured and recorded through ’06 and ’07. Soundevice disbanded but new life was found with Love Said No which featured vocalist Rogers but also Primer 55 guitarist and Soulfly bassist Bobby Burns. A four song E.P. was recorded and a full U.S. tour embarked with Frank playing drums for Love Said No and the reformed Primer 55 at the same time.

In early 2009 Frank rejoined Fozzy and Stuck Mojo. Fozzy recorded their new album “Chasing the Grail” that summer and it was released in January of 2010. The album has received numerous glowing reviews and the first single “Martyr No More” was selected to be the theme song for WWE’s Royal Rumble. With a sold out U.K. tour in May already booked and plans to visit Japan, Australia and Europe slated for the fall, not to mention playing in the studio on Rich Ward’s many producing projects in the works, it looks like an already busy 2010 is shaping up to be just the beginning for Frank. 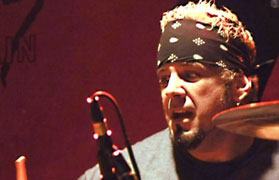