Currently one of the top drum instructors at Hollywood’s Percussion Institute of Technology, Musicians Institute, Fred Dinkins also teaches privately – in fact, he is a highly sought-after drum instructor in the Hollywood area. He also comes well recommended as an instructor, session and touring drummer by luminaries such as Harvey Mason, Joe Porcaro, and Ricky Lawson. Originally from St. Louis, Missouri, Dinkins has been playing professionally for over twenty years; he is now the resident drummer for the World Recording Studios (John Barnes), where he is presently writing and producing his own CD. 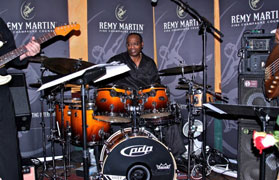