George Gray is a native of Baltimore, Maryland. He is a drummer, percussionist, and songwriter now living in Brooklyn, New York.

At the age of six, George began playing the bongos in elementary school. From there it was established that George wanted to perform professionally. At this time he began to devote the years developing the skills to eventually become a qualified drummer/percussionist. He studied percussion at the Peabody Conservatory of Music for the preparatory students. While a student at Douglass High School, he was selected to participate in the All State High School Orchestra, and in college the All State Intercollegiate Orchestra that toured nationally.

In 1972, George began his first year at Morgan State University to pursue a degree in Music Education, and to further develop his musical skills.

After college, there was a drum position offered to George to become a member of a self-contained R&B group from Baltimore called Pockets that were produced by Verdine and Maurice White of Earth, Wind & Fire. At this point Pockets opened up for Earth, Wind & Fire and Deniece Williams on the ALL N ALL tour. Pockets released three albums on Columbia Records, Kalimba Productions. This group was known as Earth, Wind & Fire’s prot 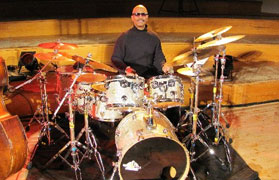