Greg has performed as a soloist with orchestras and in recital throughout North America, Europe and Asia. He has performed recitals in Weil Recital Hall at Carnegie Hall, Theatro Juarez in Mexico, the Glenn Gould Studio in Canada and at the 2005 Percussive Arts Society International Convention. Greg’s performances have been presented on CBC and NPR radio and PBS TV. In the past few years Greg has premiered over 20 works.

Greg is a faculty member at the esteemed Juilliard Pre-College and is also the coordinator of the percussion department at New Jersey City University. He has presented master classes at some of the top music schools, including the Juilliard School and the Manhattan School of Music. Greg performs exclusively on the Yamaha 6000 marimba and 2700 studio vibraphone, uses Vic Firth mallets and SABIAN cymbals. His new CD, Hammer, with major solo works for marimba, was recently released. 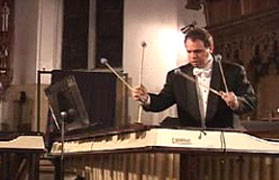