Greg Grainger was weaned on the grooves and rhythms of bands like Parliament and Weather Report. He began drumming at the age of 7. “Even as a kid,” he says, “I ate drums, drank drums, and even dreamt about drums. I didn’t want to be good, I wanted to be better than good.” At 14, he was awarded a scholarship to the highly-respected Peabody Conservatory of Music and Johns Hopkins University.

His professional debut came at the age of 19 as the youngest member of the band Pockets, the protégé band of Earth, Wind and Fire. They produced 3 albums with Verdine White of Earth, Wind and Fire. The Pockets experience was followed by a stint with Peaches and herb on their Reunited tour, and in 1988 he was chosen to play with Whitney Houston on one of her most successful tours.

“When you’re working with other artists, it’s all about support,” explains Grainger. “For me, it’s about being creatively aware and weaving into the musical fabric that’s happening at that moment. When I work with singers, it’s about paying attention to what they’re singing and the way they’re singing it. In a purely instrumental setting, the focus is a little different. There, you get your feel from playing along with all those instruments and getting the music to happen on it’s own level”

In the early 90’s Greg took time off from touring to study computer programming and audio engineering, eventually becoming an accomplished and sought-after producer. In 1993, long with his brother Gary (a well-known bass player) and Tony Bullock (Whitney Houston’s tour manager) he built Hillview Studio, producing a number of local artists as well as music for national advertising campaigns like Umbro Sports and ABC Television.

Greg remains busy as a producer and session player, maintaining a rigorous touring schedule with artists like Kim Waters, Acoustic Alchemy and Maysa and the Sax Pack. He is the house drummer for PRS Guitars and plays regularly behind rock legends like Santana, Dave Navarro and Mark Tremonte. And as if all that weren’t enough, he is currently writing the third album for Grainger, his band with his brother Gary, and has co-founded G*Funk, described as the funkiest jam band on the planet! 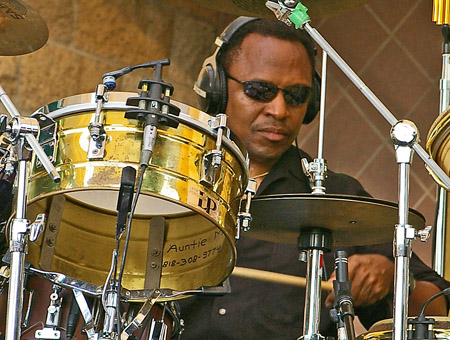