Born twirling a pair of drumsticks over a luxurious head of hair in 1971, Hari Hassin is a professional studio and touring drummer who has been heard by millions and millions of people. His playing has literally destroyed both stage and screen, be it in the 3,000 Blue Man Group shows he’s played over the course of thirteen years, on NBC’s hit sitcom Go On, CBS’s hit sitcom How I Met Your Mother or even in some of Boston’s hit sitcom bands like Roadsaw and Count Zero.

Hari has been pounding skins wicked hard since the age of 15, earning himself scholarships to the University of Bridgeport in Connecticut—which spawned the drumming talents of Dave Weckl (Madonna, Robert Plant, Chick Corea) and Joel Rosenblatt (Spyro Gyro, Blood Sweat & Tears)—and the prestigious Berklee College of Music.

From 1995 to 2005, Hari was the drummer for the popular Boston rock band Roadsaw, with whom he recorded three full-length albums and participated in five US and four European tours. When I first saw Hari play with Roadsaw, it was like seeing Keith Moon and Animal from the Muppets play a four-armed, six-figure rock duet disguised as a pair of goddamn eagles made out of gold records and hope. I might have even cried a little bit, but that’s between us.

From 1997 to 2011, Hari was the resident music director and drummer for the Blue Man Group in Boston as well as the visiting director/drummer for Blue Man shows in New York, Las Vegas, Chicago and Orlando. All told, Hari played over 3,000 shows with the Blue Man Group—including an extensive South American tour—in front of approximately 1.5 million audience members and barely lived to tell the tale. Ask him about it sometime. Seriously, it’s his favorite subject ever.

In 2010, Hari laid down drums and backing vocals for Count Zero’s Never Be Yourself, which featured the song “Shake,” a track that blasted many a young eardrum via the ubiquitous video game Rock Band.

Endorsed by Vic Firth drumsticks and Sabian cymbals, Hari has co-written & recorded songs with both Joe Perry and Joey Kramer of Aerosmith, who gave Hari a shout-out on the latest Aerosmith album. Plus he’s handsome, which is a lot more than I can say about some of you. 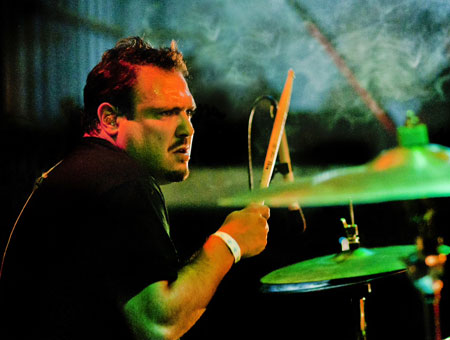