Born in Philadelphia, James Ulrich grew up in Northern Virginia, where he studied music in school from the 5th grade all the way through high school – James was the lead trumpet player for both Symphonic Band and Marching Band.

For James, playing drums began as a hobby. Watching Nirvana and Green Day music videos as a kid, James was struck by how, as he says, it was “the coolest thing I had ever seen!” Lucky for James, his stepfather’s parents owned a mom-and-pop music store, and so he soon got his first drum kit. Now that he had a kit, James spent every spare minute he could in the basement, playing along to his favourite CDs.

In high school, James and a few friends started a pop-punk band called Over It. The band remained together after high school and ended up moving to Southern California. In 2006 they signed with Virgin Records and released the album, “Step Outside Yourself.” The band toured heavily in support of the album, but ended up splitting in 2008. It was then that, along with a couple of his Over It band members, James started his current project, Runner Runner. 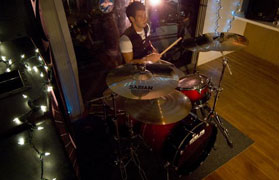