Jarrett Robinett has been a member of the United States Air Force Band of Mid-America since October of 2001. As an Air Force Musician, he has performed for U.S. Presidents, Chiefs of Staff of the Armed Services, national broadcast audiences on both television and radio, and live audiences across the country with nearly every ensemble the band showcases; such as the nationally recognized Concert Band, the Lincolnland Brass Quintet, the popular music group Starlifter, and numerous chamber music and ceremonial groups. Jarrett co?founded one the chamber music groups, the Resonant Elements Percussion Duo, that appeared at numerous percussion events around the country.

Prior to enlisting in the Air Force, Jarrett was the Director of Bands for Corning Public Schools in Corning, AR. He served as a member of several summer percussion faculties at various camps in the Southern United States during the summers of 1995?2000.

Jarrett also performed as a versatile musician in Arkansas, serving as the Timpanist for the Northeast Arkansas Symphony, Principal Percussionist for the Pine Bluff Symphony and as a section percussionist with both the Fort Smith and Conway Symphony Orchestras. While a freelance percussionist, Robinett appeared in concert with Tom Burritt in Piteå, Sweden, as a special guest on the 2001 Chautauqua Summer Chamber
Music Festival, and with music legend Ray Charles.

When not performing with the Air Force Bands, Jarrett instructs and adjudicates St. Louis area student percussion ensembles. Past groups have included the award winning Collinsville High School Bands in Collinsville, IL and the front ensemble for the O’Fallon Marching Panthers in O’Fallon, IL. He has been a front ensemble technician for WGI Finalist Gateway Percussion and is currently the Percussion Coordinator for the Triad High School Band Marching Knights in Troy, IL. He is an active member of the Percussive Arts Society, appearing as a clinician and soloist at PAS Days of Percussion, Honor Band Festivals and various Universities around the Midwest. Jarrett is also endorsed by PROMARK Drumsticks. 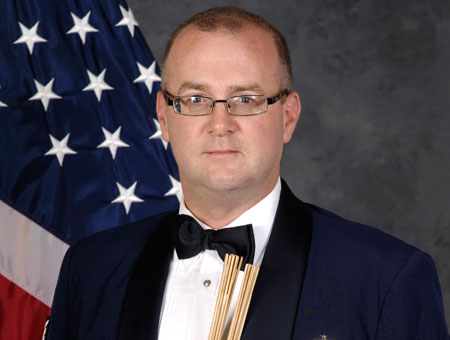