Covering the musical gambit from “Sesame Street” to “Lollapalooza,” Jeff began drumming at the age of eight. He cut his teeth in the lounges of downtown Memphis while majoring in per- cussion and classical guitar at Memphis State University where he achieved the esteemed drummer position for the “A” level Jazz Band. Jeff began touring and recording with Tony Joe White after Tony heard some demo recordings Jeff did with Jim Stewart of Stax Records. Later, Waylon Jennings was recording some of Tony Joe’s material, and since the producers were unable to improve upon the feel of Jeff’s playing on the demo, Waylon decided to use Jeff’s original tracks for “Waylon and Co.”

Waylon then made Jeff a permanent fixture in his band and Jeff spent the next fourteen years honing his skills and learning every aspect of the music business from the undisputed “rebel” of outlaw country music. When asked about his tenure with Waylon, Jeff remarks “Waylon commanded perfection on stage. It was a level of professionalism that could only be learned from the great masters of any art.” Jeff observed Waylon’s passing by honoring his privilege to have been influenced by a true legend and moves his legacy forward with a personal and profes- sional attitude that is admired both on stage and in the studio.

Jeff received recognition from Modern Drummer magazine for “Best Country Drummer” and through the years has shared the stage with many artists, but he maintains his ever-humble attitude by summing up his credentials with “You’re only as good as your last show.” 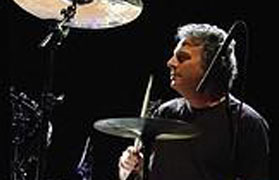