Jeff was born in Indianapolis, IN. He received his Performer’s Certificate and Bachelor of Music Education from Indiana University in Bloomington, IN, where he instructed the Indiana University Marching Hundred Drumline and served as an Associate Instructor of Percussion. In addition, he has served as a percussion instructor for several high schools in Indiana and South Carolina, as well as the Blue Stars Drum and Bugle Corps. Jeff’s foundation in marching percussion led to performances with the Bluecoats Drum and Bugle Corps, Star of Indiana’s Brass Theater, and several US and Japanese tours with the shows Blast! and Blast II: M.I.X.. His experience with drum set and Latin percussion has also given him the chance to play with many Rock, Jazz and Latin groups, including Toca Toca, Peal, and Sol Driven Train.

Currently, Jeff can be found playing drum set, percussion and mallets as the percussionist for the Dallas Brass, a brass quintet plus percussion. With Dallas Brass, he tours throughout the US throughout the school year, performing clinics for elementary through college students, and nearly 100 concerts each season. His personal highlights of each concert include xylophone solos and a Gene Krupa inspired drum solo. When not on tour with the Dallas Brass, Jeff can be found at home with his wife Cameron in Charleston, SC working with the percussionists of the championship Wando High School Band Program, or on tour with the band Sol Driven Train playing percussion, keyboards, accordion and Keytar. Hear Jeff play on Peal’s Beautiful Baby Elephant and Dallas Brass’ American Musical Journey. For tour updates and news, check out www.DallasBrass.com and www.HandelPercussion.com.

As well as a SABIAN endorser, Jeff is an Evans Gold Artist Endorser and part of the Vic Firth Education Team. 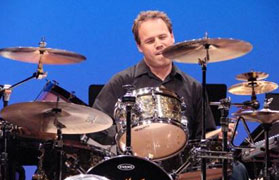