Sergeant 1st Class Jeff Prosperie arrived to the West Point Band as a member of the Hellcats in December of 2006, and serves as the section leader of the Legendary Hellcats Percussion Section. In addition to his duties as a Hellcat, he also performs with the percussion ensemble, steel band, and concert band. Jeff is a World Snare Drum Champion and is the only individual to capture the “triple crown” of solo competition (DCI, PAS, DCA). Jeff recently served for two years as the percussion arranger/instructor for the nationally televised Army All-American High School Marching Band. Prior to his position at West Point, Jeff served as Director of Percussion Studies at the University of Louisiana-Lafayette, principal percussion with the Baton Rouge Symphony, and as the percussion designer/caption-head for the World Champion Phantom Regiment Drum and Bugle Corps. He actively serves as a championship level adjudicator for DCI and WGI, and as a marching percussion committee member for PAS.

Jeff earned his BMEd from LSU, his MM from The University of North Texas (UNT), and has completed all course work for the DMA at UNT. Jeff has performed, presented clinics, and adjudicated throughout the United States, Canada, Europe, and Japan as well as PASIC, TMEA, TBA, and The Mid-West Band and Orchestra Convention. Jeff’s compositions and solo performances can be seen in his book/DVD “Aptitude – A Conversation in Snare Soloing” published by Drop 6. This publication received the very rare rating of a perfect “10” from Modern Drummer Magazine declaring it a classic. He can also be seen as a featured artist on the recent DVD “The Rudiment Project” by the Percussive Arts Society as well as several performances on Youtube.com. Jeff is a performing artist endorsed by Pearl/Adams, Sabian, Innovative Percussion, and Evans. 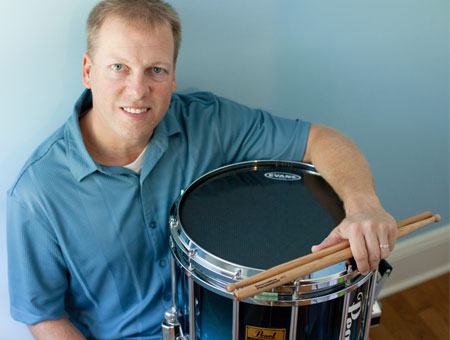