Joe Bergamini maintains a diverse career as a drumming performer and educator. Enjoying various styles of playing, he is most well-known for his progressive rock drumming in the bands Happy the Man and 4Front. A fixture on the New York scene, Joe has performed in the Broadway productions of Beautiful (The Carole King Musical); School of Rock:The Musical; Hamilton; Natasha, Pierre and the Great Comet of 1812; Movin’ Out; Jersey Boys; Rock of Ages; In the Heights; Spider-Man: Turn Off the Dark; Jesus Christ Superstar (2012 revival); Bring It On; Million Dollar Quartet; Pippin (2013 revival) and The Lion King. He has also appeared on the first national tours of Movin’ Out, Jersey Boys and Beautiful, and has performed and recorded with various artists as a sideman. Currently, Joe can been seen on select US tour dates with The Doo-Wop Project.

Recognized internationally as an educator, Joe has given hundreds of drum clinics in schools, retail stores, and conventions. He has appeared at the Percussive Arts Society International Convention (PASIC), the Ultimate Drummers Weekend (Melbourne, Australia), the Cape Breton Drum Festival (Nova Scotia, Canada), KOSA (Vermont, USA), and the Sonny Emory Drum Camp (Atlanta, USA), and has done two clinic tours for Tama Drums. He has been teaching privately at his own studio for over 25 years. Among Joe’s many private students who have gone on to pro careers is world-renowned jazz drummer Mark Guiliana.

Joe is very active in the publishing and education areas of the music industry. In 2015 he became Education Consultant for Sabian, designing and directing the Sabian Education Network for drum teachers. Joe is also the Senior Drum Editor for Hudson Music, in which capacity he has worked closely with some of the world’s greatest drummers, including Steve Smith, Mark Guiliana, Stanton Moore, Gavin Harrison, Carmine Appice, Benny Greb, John Blackwell, Aaron Spears, Keith Carlock, David Garibaldi, Jason Bittner, Derek Roddy and others. A career highlight for Joe was his collaboration with Neil Peart on his Taking Center Stage: A Lifetime of Live Performance DVD and companion book. Joe also partnered with Hudson Music co-founder Rob Wallis to assist in designing and launching Drum Guru, one of the highest-rated educational apps for drummers.

As an author, Joe has won four Modern Drummer Readers Poll awards for his drum books, including best drum book of 2013 for Neil Peart: Taking Center Stage. He is also the author or co-author of nine other books and has edited dozens more. Joe was formerly Percussion Editor for Carl Fischer Publications, has worked on various promotional and R&D projects for Tama drums, and is co-owner (with Dom Famularo) of Wizdom Media (an independent music publisher distributed worldwide by Alfred Music).

FAVORITE ALBUM YOU PLAYED ON: “Malice in Wonderland”, 4Front

CAREER HIGHLIGHT: Playing with Billy Joel at Movin’ Out on Broadway 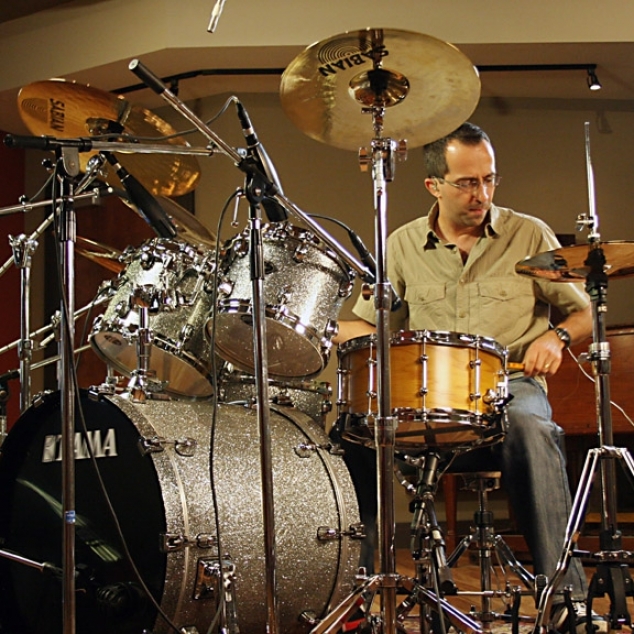