Johnathon Jadvani received his B.A. in percussion performance from the Jordan College of Fine Arts at Butler University under the instruction of Professor Jon Crabiel. He also attended Indiana State University, with instruction under Dr. Jimmie Finnie of North Texas, and Florida Atlantic University, studying privately with Keith Aleo of the Florida Philharmonic. Johnathon marched Drum and Bugle Corps with the Wabash Crusaders and was unit section leader of the Independent Open Drum line Finalist “Stryke Percussion.”

Johnathon has performed as a freelance artist throughout Indiana and South Florida. He has toured with many ensembles, performing across the nation and in Japan. These travels include a Carnegie Hall World Premier of Wolf Rounds by Grammy-winning composer Christopher Rouse along with the University of Miami Frost Wind Ensemble. Johnathon has written and arranged for percussion sections of several Indiana State Championship and BOA Finalist bands, as well as, writing and arranging for many Indiana and Florida WGI Championship percussion ensembles.

BORN IN: Terre Haute IN

CAREER HIGHLIGHT: I was a member of the percussion section for a Wind Symphony World Premier of Christopher Rouseâ€™s Wolf Rounds in Carnegie Hall. 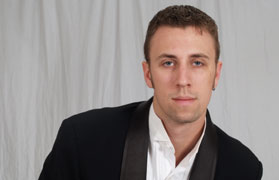