Jon decided early in life to be a professional drummer. His first recording session was at age 13 with studio guitarist Al Casey, and he played with youth orchestras and marching bands, performed in his high school theater arts band, and even managed to join a rival high school’s stage band. He and his bandmates won the 1974 Battle of the Bands at the Hollywood Bowl, and also made recordings that received airplay on the Dr. Demento show, which would soon lead to a turning point for Jon.

Jon played wherever he could, did countless demo sessions, and by 1977 had joined a working band and was making a living playing drums, all the while pursuing additional work.

On September 14, 1980, Jon was invited by Dr. Demento to be interviewed about those recordings he’d submitted a few years earlier. There, he met “Weird Al” Yankovic, who happened to be answering request lines that night. Al was preparing to play his newest song – Another One Rides The Bus – live on the air, and asked Jon if he’d pound out a straight beat – on the accordion case! Jon agreed, had a great time, and told Al afterward “You should have a band, I’ll be your drummer 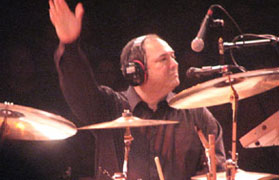