Multi-percussionist Joseph Gramley is a professor of music at the University of Michigan and director of the university’s famed Percussion Ensemble.

Gramley’s dynamic and exciting performances as a soloist have garnered critical acclaim and enthusiasm from emerging composers, percussion aficionados and first-time concert-goers alike. He is committed to bringing fresh and inventive compositions to a broad public; he often commissions and premieres new works. His first solo recording, American Deconstruction, an expert rendition of five milestone works in multi-percussion’s huge new modern repertoire, appeared in 2000 and was reissued in 2006. His second CD, Global Percussion, was released in 2005.

An invitation from Yo-Yo Ma in 2000 led Gramley to join Mr. Ma’s Silk Road Ensemble. In addition to participating in the group’s extended residencies in American cities, Gramley has toured with Mr. Ma and the Ensemble throughout North America, Europe and Asia, performing in the world’s finest concert halls. Along the way, Gramley has studied percussion styles and instruments from around the globe, collaborating with internationally-renowned musicians from India, Iran, China, Japan, Korea and Central Asia. He has appeared on several top-selling albums with Yo-Yo Ma on the SonyBMG and Sony Masterworks labels, including Songs of Joy & Peace, which in February 2010 received a Grammy Award for Best Classical Crossover album.

In November 2008, Gramley and Yo-Yo Ma performed together as guest soloists with the Nashville Symphony and conductor GianCarlo Guerrero.

In addition to his solo and Silk Road work, as well as his frequent appearances with chamber groups and orchestras, Gramley performs with the acclaimed British organist Clive Driskill-Smith in the duo Organized Rhythm. The pair’s first recording, Beaming Music, was issued in 2008.

Born in 1970, Gramley grew up in Oregon and was named a Presidential Scholar in the Arts while a senior at the Interlochen Arts Academy in 1988. He did his undergraduate work at the University of Michigan and also attended the Tanglewood Institute and Salzburg Mozarteum.

Gramley made his concerto debut with the Houston Symphony Orchestra after winning their National Soloist Competition, and made his solo debut at Carnegie Hall’s Weill Recital Hall in 1994. After graduate studies at the Juilliard School in New York, he performed and recorded with the Ethos Percussion Group throughout the U. S. and Europe.

For ten years Joseph Gramley has directed the Juilliard Summer Percussion Seminar, an intensive program for high-school students held annually at Lincoln Center in New York City. During 2009-10, Gramley was the featured guest artist for both the Michigan and Alabama Days of Percussion sponsored by the Percussive Arts Society. 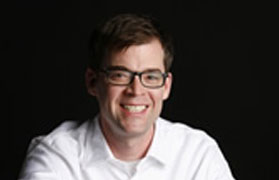