Described as “fantastic” by Prince Music Director Mike Phillips, Junior “JK” Kirton has demonstrated a unique skill and passion for music throughout his 5 years as a fixture in the music industry.

JK burst onto the scene at the tender age of 19; it didn’t take him long to get noticed by fellow musicians and fans alike. A visit to any of London’s many live music events during those early years would more than likely have afforded you the pleasure of seeing the young, dynamic and accomplished drummer. JK’s tenacity was evident right from the start; his performances were often described as “raging”, a highly complimentary term to a musician if ever there was one!

Kirton’s determination has paid off in dividends; he regularly plays with the most successful, well respected artists in the industry: N*Dubz, Sugababes, UK Soul Diva Beverly Knight, Cherri V and Prince’s N.P.G. are but a few. He also performs in the UK’s most prestigious events, such as BBC National Lottery Awards, Hollyoaks Music Show and Big Weekender, as well as a whole host of TV appearances. At the age of 24, JK’s dedication and onstage energy have gained him the respect of one of the greatest session musicians working today, Chris Bailey (Britney Spears, Will Young, Mica Paris). As his mentor, Bailey has predicted that JK is “destined to become one of the greats.”

Hailing from Croydon, South London, JK has grown to be a wonderful role model to young people across the country. Currently playing for top selling artists Taio Cruz, Alesha Dixon and Tinchy Stryder, his talent continues to make a great impression. JK has just been booked to serve as Musical Director on veteran performer Gabrielle’s next comeback tour in 2011. 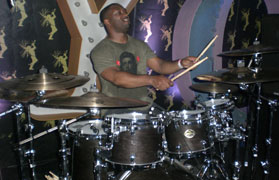