Karl Vanden Bossche’s family originally from Ghana, came to London in the early sixties. Karl who was born and grew up in London didn’t have a musical background in his family. In his very early years his brothers exposed him to reggae and soul. As he got older more musical genres like jazzfunk and pop widened his musical taste and while at secondary school his teachers noticed he had an ear for music. Between the age of 15 and 17 was very important time for Karl, because this is when he started to go and check out live music, meet a dj called Sylvester Tenkorang (who introduced him to latin jazz) and became a member of his first band which was called Phase 1.

The band was made up of friends who had been checking out bands like Level 42, Morrissey Mullen, Breakfast Band and Light of the World, who were big influences in their lives. He decided to pick percussion, because it looked easy at the time. OH BOY. As time went on most of Karls friends went on to proper jobs, this is when Karl bogged down and started to practise to music, at the London school of bedroom. Karls first instrument was bongos, followed by congas, timbales and assorted percussion and then drums. Practising to music and going to a big swing band work shop, helped Karl to understand groove , feel timing and how to play parts.

From there onwards things just fell into place, most important was going to gigs and meeting other musicians, asking questions about how they got started, where to go for jam sessions, etc. Karls was always in some kind of reggae or funk band, but his first break was joining a band called King Salsa. In this band is were he meet some musicians who recommended him to more popular bands. 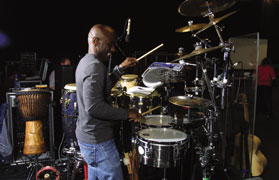