CAREER HIGHLIGHT:
Playing with Neil Peart and for the president of Brazil

A contemporary percussionist and educator, Marcus is a native of Bahia, Brazil. He commits his life to the study, teaching and performance of his hometown’s Afro-Brazilian music and heritage.
Marcus received a scholarship and completed his studies with honors at Berklee College of Music in Boston.

He has performed with artists like Paquito D’Rivera and the Gipsy Kings. Marcus also performed with the “One World Band” produced by MTV and played on the Oscar nominated movie ‘Rachel is getting Married’ featuring Anne Hathaway. He has been honored with the Outstanding Arts Performer Award by the Brazilian Immigrant Center (2008) as well as Outstanding Percussionist Award by Berklee College of Music in 2004.

Marcus produced his own DVD ‘Modern Approach to Pandeiro’, www.playpandeiro.com and the DVD ‘Musically Speaking II’ together with BOSE. He is also part of Neil Peart’s (RUSH) DVD from Hudson Music.

Marcus leads and has lead workshops on Afro-Brazilian percussion and music for Social Change in universities and conventions around the world such as MIT, Harvard, Brown U, Universidad Central de Venezuela and PASIC 2007, 2010 and 2011. He is currently the director of the Grooversity network project, www.grooversity.com , and artistically directs nine drumming groups in seven different States in the US. In 2012, Grooversity was featured at the TEDx talks and performed for the president of Brazil. 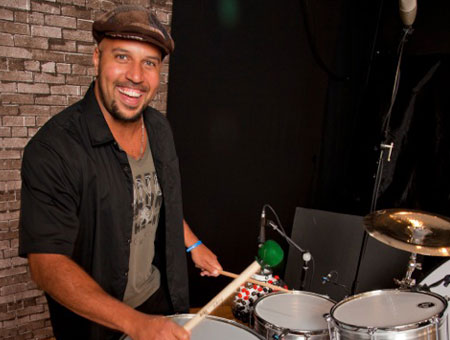