A native to New York, Mark Flynn began playing drums at the age of ten when inspired by hearing John Lennon’s Double Fantasy for the first time. Mark rooted himself in rock and jazz bands as a teenager and prospered during his formative years while living in Boston by setting out on tours with soul artists from Memphis and Chicago. Through those experiences, Mark developed the musical skills that come with performing nightly for several hours at a time. His most memorable of all performances during that era was backing up singer James Carr.

During the late 90s, Mark became the drummer for the Benjamin Orr Band through a lead from an old college (Berklee) friend. Performing the classic music of The Cars’ and Benjamin Orr’s solo material afforded Mark another great opportunity to back up a legendary vocalist and augment his professionalism as a musician. Upon Benjamin Orr’s passing, Mark then moved to New York City to further develop his music career.

Mark currently lives in New York City and performs with the Artie Stewart Band and The Disciples. He is also a faculty member at Drummers Collective where he has been teaching courses to drummers from around the world for eight years. 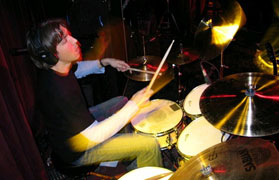