Mark O’Connell started playing drums in his parent’s basement when he was 8 years old. He started his first band a year later but declares “that band doesn’t count.” Ironically it was with his brother David and David’s best friend, bass player and future band mate Matt Rubano, who would join Taking Back Sunday a few years after Mark. The first band Mark played in that ventured out of the basement was called The Poseurs. They played an array of high school and punk-rock basement shows before that band’s singer traded in the microphone for domestic life.

Taking Back Sunday hit the scene hard with the release of their debut “Tell All Your Friends.” Alternative Press just named the lead single from that album into one of the 10 most important songs of the last 10 years. Boasting three gold albums and countless tours across multiple countries, Taking Back Sunday get the most out of their music playing live. The band has shared the stage with many of Mark’s idols including Metallica, Pearl Jam, Green Day, Linkin Park, Bon Jovi, Rage Against The Machine and many others. Mark recounts the headlining tour in 10,000 seat arenas across the US in the Summer of 2006 as one of his favorites. “Getting on stage every night was unbelievable. My most memorable experience was when we hit the stage for our sold out show at Nassau Coliseum. My head just filled with memories of all of the Islanders games that I went to with my Dad, my first concert I ever went to which was Tom Petty at that venue, the Green Day show I saw there, even passing by it every day driving to college for a year. It really felt like something, you know?”

Enjoying being in the press that ‘even my mom knows about’ including reviews in USA Today, Entertainment Weekly, People, The New York Times, Rolling Stone and many others and also performing on the late night talk shows and being introduced by Jimmy Kimmel, David Letterman, Jay Leno, Conan O’Brien have been some of the other highlights. Mark has also had features written about him in Modern Drummer and Drum! Magazine and continues to write, tour and practice. He is looking forward to hitting up Australia in early 2010 to share the stage with Faith No More, Janes Addiction, My Chemical Romance and many others on the Soundwave Festival.

FAVORITE ALBUM YOU PLAYED ON: “Happiness Is”, Taking Back Sunday

FAVORITE ALBUM YOU DIDN’T PLAY ON: “Who’s Next”, The Who

CAREER HIGHLIGHT: Still having a career 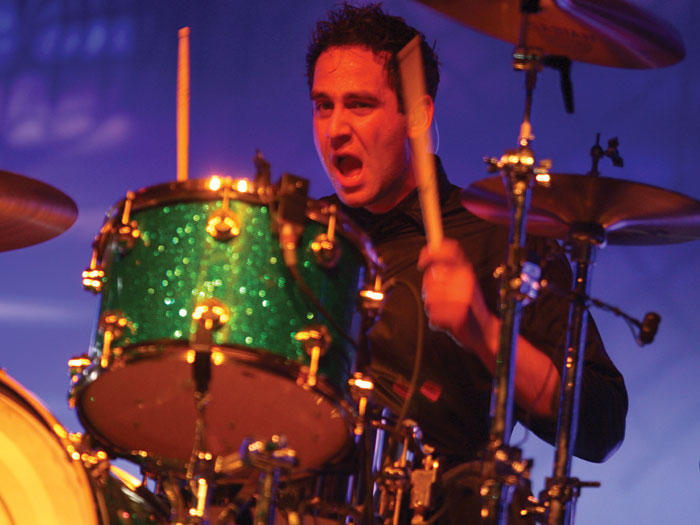