Mr. Cremisio is currently the K-12 Academic Administrator and Director of Music at the Shenendehowa Central School District and also an adjunct music faculty member at The College of Saint Rose. He has been invited to conduct and adjudicate at both local and regional music festivals as well as present numerous drumset clinics and rhythm section workshops on behalf of CASDA, NYSSMA, PAS and IAJE. In addition, Matthew has written numerous reviews of various performance and educational literature while serving as a staff writer for Jazz Player magazine and Warner Bros. publications. In 1999 Mr. Cremisio presented a series of rhythm section workshops and guest artist performances throughout Switzerland as part of a tour with the Empire State Youth Jazz Ensemble.

Matthew has served on the Educational Advisory Board with the Pro-Mark Corporation, invited to join the Percussive Arts Society (PAS) National Drumset Education Committee and most recently has been appointed to the office of Vice- President with the International Association of Jazz Educators New York State Chapter. As a performing artist and educator, Mr. Cremisio is sponsored by the Yamaha Corporation Of America, Pro-Mark Corporation and Sabian Cymbals. 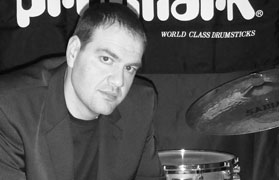