Nate Arling is a Hard Rock drummer from Chicago IL and founding member of The Last Vegas. Nate has also played with Chicago’s Urge Overkill, and Garage Psyc band The Cynics.

Nate grew up in Rockford IL learning to play drums at an early age playing along to Beatles, Cheap Trick, Jerry Lee Lewis, KISS, Stray Cats, Motley Crue, Guns n Roses, and Metallica records and writing original music with his brother Adam, who is also in The Last Vegas.

TLV have recorded various records at many different studios with award winning producers Marti Frederickson, Nikki Sixx, and Roy Z, while also producing a lot of their own music.

In Feb 2009 Nate Arling was the featured drummer and on the cover of the Guitar Center Drum Mailer.

The Last Vegas are currently supporting their latest record Whatever Gets You Off which was selected by the Itunes Critics as one of the Top 15 Rock Records of 2009 and their Single I’m Bad as the Rock #1 single of 2009. 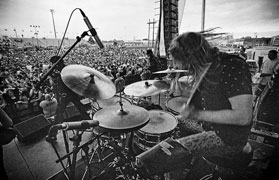