FAVOURITE ALBUM YOU PLAYED ON: “Landmark” and Caribenos “Latin American Music for the Marimba”

CAREER HIGHLIGHT: According to the San Juan Star, Orlando is “an artist of musical sensitivity and accomplished technique.” As a solo marimbist, Orlando unites his solid classical training and Latin American background to create a powerful combination of rhythm and music previously uncharted in the marimba world. He regularly performs at international festivals, including Percussive Arts Society International Convention, and conducts workshops and master classes in colleges and universities throughout the United States. He has also been invited to perform in Asia, Mexico, Trinidad and Tobago and Central and South American.A sought-after performing and recording artist, Orlando has collaborated with music legends of this generation, including Darin Atwater, Andy Gonzalez, Giovanni Hidalgo, and Edwin ColÃ³n Zayas. On the congas, Latin Beat magazine calls Orlandoâ€™s â€œsolid conga drumming . . . a percussive pillar.â€ He has been the conguero of Panoramic, a fusion band lead by Pan virtuoso Liam Teague. He was the lead conguero of Rumba Club, one of East Coast’s popular Latin Jazz ensembles. These collaborations have lead to performances at major venues in the U.S. including the Telluride Jazz Celebration in Colorado, The Blue Room in Kansas City, Blue Note and Birdland in New York City, Blues Ally and the Kennedy Center in Washington, D.C. As one of the Semifinalists at the Thelonious Monk International Jazz Hand Drum Competition, Orlando performed in front of an impressive panel of judges including Candido, Ray Barretto, Milton Cardona, Big Black, and Babatunde Olatunji.His first solo marimba recording CaribeÃ±os â€“ Latin American Music for the Marimba received critical and popular acclaim. Percussive Notes praised it: â€œThe immediacy and vitality of the music on [CaribeÃ±os] impresses the listener from the very first selection.â€ His subsequent recordings A Little Prayer paid tribute to his classical training whereas Wild Hands demonstrated an amalgamation of his creativity, classical training and Latin roots. Orlandoâ€™s newest CDLandmark – Afro-Cuban Music for the Marimba features artist Michael Spiro will be release in the spring of 2010. Orlando is a performing artist endorsed by Yamaha, ProMark, Sabian and Latin Percussion. He is a faculty member at University of Delaware and Nathan Carter School of Music in Baltimore City. 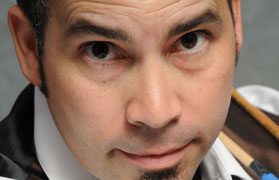