Richie Flores is one of the most in demand percussionists of today’s active music scene.  Born in Brooklyn, New York, raised in Trujillo Alto, Puerto Rico, Richie was a prodigious child that began playing congas at the early age of 5. He embarked on his professional career by age 8 playing with Grupo Batacumbele and Roberto Roena and the Apollo Sound.  By age 13, he traveled to New York to play with Roberto Roena at the Village Gate, making him one of the youngest musicians ever to travel with a band outside of Puerto Rico. He  continued performing professionally while  studying percussion at  the highly  regarded Escuela Libre de Musica in Hato Rey, Puerto Rico.

Richie’s musical career continued  to evolve by playing with some of  the most  respected and celebrated artists  in Music  today such as Tito Puente, Eddie Palmieri, Cachao, The Fania All Stars, Gato Barbieri, Hilton Ruiz, David Sanchez,  Tropijazz All Stars, Jack Bruce of Cream, McCoy Tyner and even  the Beastie Boys. He has participated on many notable recordings,  including  the Grammy Award Winning albums “Master Sessions – Volume I,” 1995 by Cachao, Dave Samuels 2003 “The Gathering” and The Celia Cruz 2002-2003 double Grammy winner album  “La negra  tiene  tumbao”.   Grammy nominated albums  “Arete” by Eddie Palmieri in 1996 and on “Palmas” in 1994, as well as David Sanchez’s Grammy nominated album “Obsession” in 1997 and many more.  He played for President Clintons Inauguration in 1998 and for the UN…All the Presidents around the world in 2000.

Richie’s  strength  is  in  creating  a  “New  Generation  Latin  Jazz”…… World Music  uniting  all  his musical  influences,  as well  as combining all he has learned from the Masters he has played with. Through his music he has found a way to express his own voice. A voice that is playful, innovative, fresh and unique, while still honoring his deep love and loyalty to his Latin Roots The Septet is integrated by old time friends  Robbie  Ameen, drums and John Benitez, on bass and guitar; Elio Villafranca, in the piano,  Ivan  Rentas,  tenor  sax, Mike  Rodriguez,  trumpet,  the  incredible  talented  Marfil  Delgado  on  vocals  and  Richie  Flores director and percussion. This is Richie’s Septet first production, his second album is to be recorded in Japan later this year 2012.His album is available on iTunes.

Mr. Flores has his own  line of Congas with PEARL DRUMS since 2001 and actively  tours  the world  teaching clinics at various institutions  on  behalf  of  Pearl,  having  visited:    most  states  in  the  USA,  North  and  South  America,  most  Europe  countries, Thailand,  Indonesia,  Hong  Kong,  Tokyo,  Canada,  South  Africa  and  Senegal.    Richie  is  also  signed with  REMO  representing Crimplock Symmetry Drum Heads, SABIAN’s Cymbals and Vater Percussion where he has his Signature Sticks. 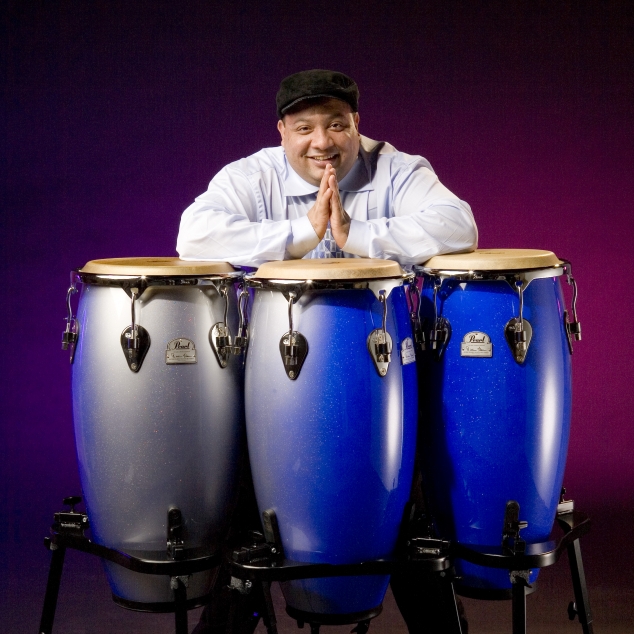