One of Canada’s leading drummers, Rick Gratton is one of those rare players who is so good that people like Richie Hayward, Carmine Appice and other major artists had no choice but to become big fans. Toronto-based Rick has played with a number of top Canadian bands, most notably Rough Trade and The Boomers. But a player of Rick’s caliber makes his name on the strength of his own vision and ability. And that is what he has done. His books, Rick’s Licks, are the bibles of many of today’s top players. What they contain between their covers is enough to make most players melt. And his collaboration on the book Extreme Independence saw him in the best seller lists and the Modern Drummer Readers’ Poll. But seeing Rick play is what it’s all about. Superimposing artificial groupings into funky grooves, or blowing odd-times with fearless fluidity, this drummer with the big sense of humor is absolutely frightening. Check out his two-feet-on-one-bass-pedal move. Rick Gratton is definitely worth getting to know. 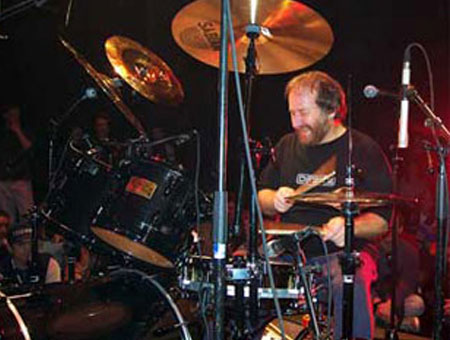