From the drum set Sherrie leads The DIVA Jazz Orchestra, her quintet FIVE PLAY and The DIVA Jazz Trio. From Carnegie Hall, she performs with The New York Pops and from celebrated stages everywhere, she is music director for Broadway star Maurice Hines. Sherrie is also a busy freelance performer and a published composer/arranger.

With her 3 bands Sherrie has performed at many of the world’s most acclaimed music venues and jazz festivals. DIVA was recently featured on the soundtrack for the 2014 NBC-Macy’s Fireworks Spectacular; on CBS Sunday Morning with Charles Osgood and also TCM’s televised broadcast of the 25th Anniversary of the Kennedy Center. In 2009 Sherrie and her trio were guests on Marian McPartland’s world-renowned NPR show Piano Jazz, and in 2012 DIVA was featured prominently in the award-winning documentary film The Girls in the Band.

Sherrie has received several awards and honors which include a 2014 Ovation award for “Best Music Direction” for Tappin Through Life; a 2013 Helen Hayes Award nomination for Outstanding Music Direction, Tappin’ Thru Life; the 2009 Mary Lou Williams-Kennedy Center Lifetime Achievement Award, a 2013 State Department grant for FIVE PLAY to tour Vietnam, a tour grant from Arts International, The Kennedy Center Alliance Award for Outstanding Achievements in the Arts, a grant from Meet the Composer, a Doctoral Fellowship from New York University, the 2006 New York City Music Educator’s Award for Outstanding Contributions to Education and was selected New York University “Music Teacher of the Year” in both 1997 and 2000.

As an educator, Sherrie runs a private drum set and percussion studio in Philadelphia and East Stroudsburg, PA. She also serves as a conductor for The New York Summer Festival and is an active clinician for Yamaha Drums, Sabian Cymbals, Aquarian Drum Heads and Vic Firth Drum Sticks.

DIVA’s most recent recording, A Swingin’ Life (2014, MCG Label) was recorded live at Dizzy’s Club Coca-Cola in New York City and features vocal legends Nancy Wilson and Marlena Shaw. DIVA, FIVE PLAY and The DIVA Jazz Trio have released a total of 20 CDs. Some of Maricle’s additional recording credits include The Time Being, Cookin’ on All Burners, Dedication, Sherrie Maricle & Friends “LIVE,” and numerous CDs with The New York Pops.

FAVORITE ALBUM YOU PLAYED ON: “A Swingin’ Life”, The DIVA Jazz Orchestra

CAREER HIGHLIGHT: One highlight was playing Carnegie Hall with The DIVA Jazz Orchestra. I have many! 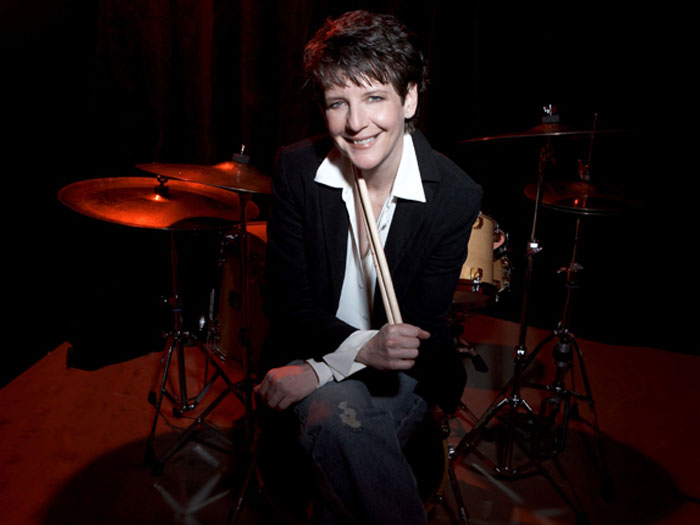