Steve Moore, aka “The Mad Drummer,” has made quite a name for himself touring with the showband Rick K. & The Allnighters. His unorthodox approach and visual antics (a carryover from his metal roots) has been attracting a great deal of attention over the last several years. However, it was the actions of a fan that really put Steve on the map…

On June 1, 2010 a random fan uploaded a performance of Steve Moore on YOUTUBE entitled, “This drummer is at the wrong gig.” The video immediately went viral receiving over 5 million hits in less than a month. Even Mike Portnoy (drummer for Dream Theater, Avenged Sevenfold) tweeted about Steve saying “O MY GOD…..This guy RULES!!” Within weeks, Steve was recognized by Ludwig, Pro-Mark, SABIAN, Evans, Modern Drummer, Yahoo, Drummerworld, and was the topic of every major drum forum on the web.

Steve has taken full advantage of the momentum, making numerous appearances, performing at clinics, and somehow manages to perform nearly 200 shows a year. He was featured on The Bio Channel as well as NBC, where he performed as a guest on “The Office.” He has performed in Russia as well as Germany, where he was showcased on Germany’s #1 Late Night Talk Show (TV Total) for three consecutive nights. He even performed at The Adams Drummers Festival in Belgium, where he closed the show with his hero (Mike Portnoy) by his side!

BORN IN Elkins, West Virginia in 1969

CAREER HIGHLIGHT Closing the Belgium Drummers Festival with Mike Portnoy sitting beside me. 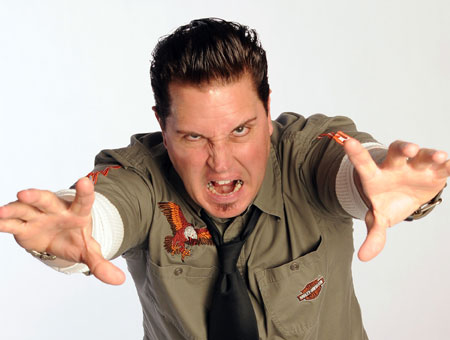