The rhythm is in his soul. From the moment Tom Teasley first heard the beat of a drum, it burrowed into his heart. And now he’s one of America’s leading percussionists, a musician, author, sound healer, sound designer for theatre, composer, cultural envoy, and expert on global rhythms. He’s a man of many parts, and he cares passionately about every one of them. As Modern Drummer magazine said of Teasley: “Just when you think you’ve got him figured out, he pulls another rabbit out of his hat.”

He’s constantly in demand, continually exploring sounds and beats, and for his work he’s a man with shelves full of trophies. 2016 has brought him a Drummie Award as World Percussionist of the Year from the prestigious Drum! Magazine, which also named him First Runner-Up as Percussion Clinician.  Teasley recently received his fifth nomination for the Helen Hayes Award for Outstanding Sound Design in theater – which he won in 2010 and 2011. 2015 saw him win the Washington Area Music Association World Instrumental Award for the fourth consecutive year, while his CD Dreams of India won World Music Recording of the Year. “It’s wonderful to be acknowledged like that,” Teasley admits. “But I really love the challenge and the breadth of all the different things I do. My goal in music is variety and finding a connection to everything.”

It all began as a teenager, drumming in a band that played Motown covers to get the crowds dancing. During that time Teasley made his first great discovery about music.

“It was all very backbeat oriented,” he says. “I learned that two and four were more than just a place in the measure, that they had emotional significance. I learned how to play for the body in motion.”

It all grew from there. He studied classical music at the Peabody Institute in Baltimore before becoming a pupil of lauded jazz drummer Joe Morello.

“He gave me the tools to examine the inner workings of different music,” Teasley says. From there he moved to New Orleans, performing with bluesman Catfish Hodge and learning to play in the pocket in a city where global music cultures came together.

“Hearing all these new, unique rhythmic concepts ignited the idea of studying with other drummers in other cultures.”

He learned from Ghanaian master drummer Yacub Addy, immersing himself in West African rhythms, studied with frame drum virtuoso Glen Velez, and began his ongoing education in Indian music. He’s absorbed them all into his own playing, and also taken in so much from his experience as a cultural envoy for the U.S. Department of State, collaborating with local musicians in places as diverse as Saudi Arabia, Jerusalem, New Zealand and Korea.

“What I do is deconstruct all these styles and ideas for my own purposes,” Teasley explains. “I’m creating an American hybrid from all these elements. It’s not unlike the way music travelled along The Silk Road centuries ago, but in a digital age. I take a rhythm or technique from one part of the world and apply it to somewhere else. It’s cross-pollination.”

How he achieves that is the idea behind Teasley’s new book and DVD, An American Approach to World Percussion (Alfred Publishing).

“I’ve taken a lot of Morello’s ideas for the drum kit, as well as classical percussion, and applied them to world percussion instruments also using four-part co-ordination,” Teasley notes. “So I’ll have doumbek and djembe played like a pair of congas, for instance. Or an Italian technique on an Indian frame drum applied to an American jazz composition.”

All that experience, and a strong dose of imagination, are also the force behind his eighth CD, Eastern Journey, based on Teasley’s soundtrack for the play Journey to the West, which sees him play more than a dozen instruments, including keyboards and flute.

“It’s very different from all my previous recordings,” Teasley admits. “It’s mostly my very liberal interpretation of Chinese-inspired music. I use a special kit with temple blocks and play it with mallets to give a dry sound.”

Becoming active in the world of emotional healing / therapeutic sounds is a fresh, new venture for Teasley. He recently supplied music and sound design for “Getting to Work: Resiliency in Demanding Situations,” the newest CD of guided meditations by a physician, Siddharth Ashvin Shah. Tom will also join Dr. Shah and the Greenleaf Integrative team this fall as a healing sound practitioner working to counteract the impact that traumatic stress has on our society.

And already he’s planning for the next twelve months, writing and performing the music for a series of showings of Fritz Lang’s expressionist film classic Metropolis (“it’ll be electronica and Weather Report meets DJ Logic.”), creating the soundtrack for the Constellation Theater’s Arabian Nights in May 2017, as well as being a mentor for the Strathmore Arts Center Artist in Residence Program 2016-17.

Teasley has also been exploring video art based on his music with the multi-media project, Sounds You Can SEE. It’s the natural extension of his other work, taking it into a more visual realm where images and music becomes synchronized to create an abstraction of his performance.

“There are three spokes to it,” Teasley says. “Dada Reimagined and Performance Collage, and then Wisdom, which features my music alongside spoken word. We’ve spent a long time working on this and it’s out now on DVD.”

Another recent project finds Teasley combining his percussive worldview in the context of a trio with saxophone and piano. This project just debuted to a sold out audience at The Kennedy Center. The entire concert was videotaped and available on request

Forming connections in rhythm and sounds, building links in music, using an ever-expanding palette; that’s been Tom Teasley’s ethos since he first heard that drum beat. And it won’t end.

“Sound is a sacred space that I have devoted my life to exploring,” says Teasley. “The goal of my music is to interpret the joy and provide healing for of all us, by tapping into the beat and pulse that connects with the heart, no matter what our cultural starting point.” 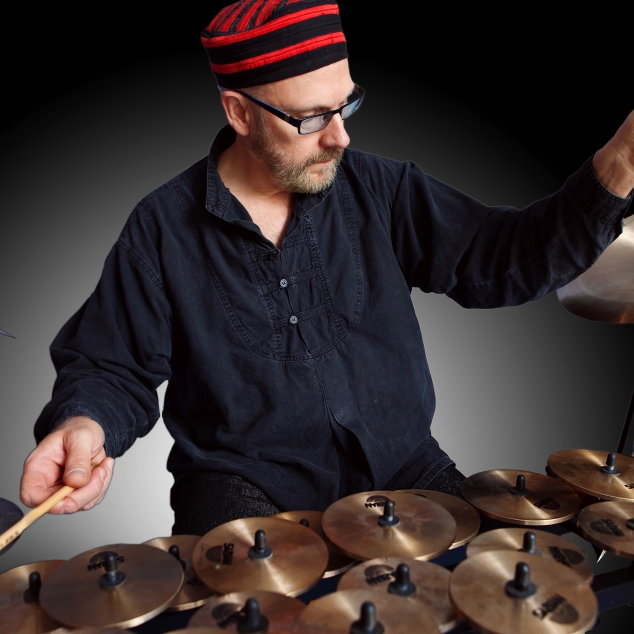