Born in Claremont, New Hampshire, Tom’s family moved to Dallas when he was 10 years old, where he began a formal study of drums and percussion which continues to this day. After graduating from St. Marks School of Texas, he attended University of North Texas to study music, earning a Bachelors Degree in Jazz Studies and minoring in Music Theory. Freelancing around Dallas/Ft Worth since he was 17, he eventually joined a little band from Texas – the Dixie Chicks (their first drummer and guy on stage with the band). His tenure with the girls stretched from 1991-96 including 3 records, many TV appearances and countless shows in the US, Japan and Europe.

Tom joined the Robert Earl Keen Band in May 1997, recording all of Robert’s records since and logging countless miles on tour. “I am so fortunate to be able to tour around the country all these years with my best friends (all incredible musicians) and play such great songs every night.”. Tom is based in Austin, TX where he is also the drummer for the Austin City Limits All-Star House Band, backing most of the artists on the ACL Hall of Fame Awards shows since 2014. 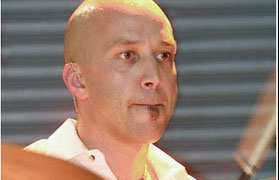