Tony Verderosa has performed and recorded with Dream Theater’s John Petrucci, ColdCut, Underworld, Michael Brecker, Randy Brecker, Katy Perry, Jessica Simpson, Dave Samuels, Sinead O’Connor, Philippe Saisse, Joe Perry (Aerosmith) and Angelique Kidjo. He has released a number of solo CD’s and a series of books on drumming and technology published by Hal Leonard. He designed a signature series of cymbals with Sabian as well as a signature drumstick with Pro Mark. Tony V. was also the Music Director, Arranger, and drummer for the MTV Video Music Awards at Radio City, Performing with Katy Perry and Joe Perry (Aerosmith). During his formative years at the Crane School of Music (Potsdam NY), Tony Verderosa was inspired by Bill Bruford (Bruford’s Earthworks) and drummer Frank Briggs (805). While studying classical percussion and drums with distinguished teaching professor and noted percussionist/conductor, Jim Petercsak, Tony was exposed to the Music of Varese, Xenakis, Stockhausen and John Cage along with digital music technology. This widely varied background helped Tony V. develop an innovative technique which was documented in a special concert performance in Tokyo (filmed by Yamaha) for the debut of the DTS70 Triggering Module. Verderosa pioneered a new approach to drumming by programming complete chord voicings on each drum pad, which would then trigger synth modules and samplers. Tony uses 8 drum pads surrounding his 5 Piece acoustic set along with a complete set of Sabian Cymbals. Each acoustic drum also has it’s own trigger which allows for additional chord voicing and sound effect layers. Verderosa’s technique is documented in a series of books with Hal Leonard that explore his passion for Electronic Music. He also filmed a solo concert in NYC and a released series of instructional DVDs. Tony resides in NY where he is busy writing songs and producing new artists for his record label, KBV. He is also active as a composer and music supervisor for Film and TV projects. 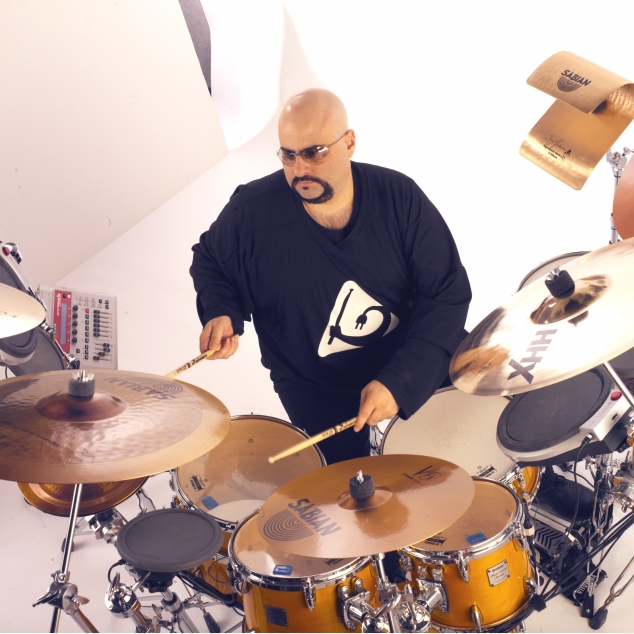